MIBrew Magazine hosted a KISS Cadillac event at the Clam Lake Beer Company on March , 2019. At the event, they unveiled the spring cover photo featuring a "KISS City USA" article highlighting the Cadillac KISStory Tour and the craft brew scene in Cadillac. The article also has a photo of Coach Brines and Coach Neff at the KISS Monument.

The Cadillac Area Visitors Bureau gave away tickets to the KISS concert in Grand Rapids on March 9. I was given the honor of drawing the winning entry. 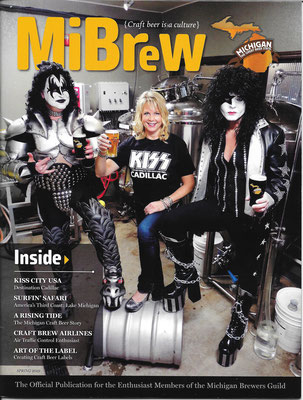 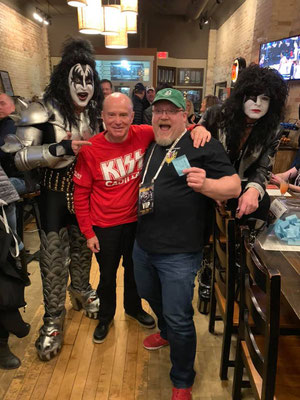 It sounds like a Hollywood screenwriter's fantasy: a small-town high-school football team turns around a losing season, inspired by the music of wildly theatrical rock and rollers from New York. The team contacts the group with an unlikely ask: Would they consider visiting, so the town can say thanks? The band, on the cusp of superstardom, agrees — resulting in one of the most improbable, wholesome, heartwarming stories in rock history. But this was no movie: the year was 1975; the town was Cadillac, Michigan; and the band was KISS. Here, after unearthing never-seen photos from the event, FOTO celebrates an unrepeatable pop-culture moment, and speaks with a man who helped make it happen.

KISS Cadillac 1975 Named a Top Michigan concert of ALL TIME!

On March 30, 2016, MLive.com named the 30 Greatest Michigan rock concerts of all time. KISS Cadillac 1975 is on that list (slide 32). Plus, the front picture of the article is a KISS Cadillac photo.

Media coverage was extensive for the KISS Cadillac Homecoming 40th Anniversary Celebration, both in this country and around the world. The story was even carried by newspapers in China and India. Here are some of the articles written about KISS Cadillac.

Some of the original 1975 articles as they appeared in print.

Here are some articles with inside information about the KISS visit.

My First Picture with KISS

I've done hundreds of newspaper, television, and radio interviews about the KISS visit to Cadillac. Plus, I've retold the story to thousands of KISS fans in personal meetings, phone calls, and e-mails. One of the most asked questions has always been, "May I have a picture of you and the band?" Sadly, I've never been able to fill those requests because, as odd as this sounds, no such photo exists. With all that went on in 1975 getting my picture taken with KISS was overlooked. In the 35 years since, the opportunity just never presented itself. On September 11, 2010 KISS was at DTE Energy Theater outside of Detroit. Through the kind efforts of McGhee Entertainment the Michigan-based members of my family were all treated to the concert, all-access passes, and pictures with the band. Upon seeing me Paul exclaimed: "Jim, you look exactly the same. You haven't changed at all." When I attempted to reintroduce myself to Gene he stopped me immediately. "I know who you are, " he said. About Cadillac he added, "That's become a wonderful story, hasn't it." The occasion was also my 7 year-old grand daughter's first KISS concert. Paul called her "Sweetie" and Gene gave her a fist bump and told her she had a nice smile. It was a wonderful evening, reinforcing that KISS has never forgotten Cadillac. Thanks to the entire band and Melissa Madden at McGhee, I now have my picture. -- Jim Neff --

Whatever happened to the KISS Boulevard signs?