The Story of the KISS Key

This is a column I wrote for the Cadillac News. It tells the story of the KISS Key. I have updated some information for this page. -- Jim Neff

One of the cool things about planning the KISS Cadillac Homecoming 40th Anniversary Celebration is connecting with people from all over the world. On Twitter, for example, kisscadillac has followers around the globe, including places like Bangladesh, Spain, Norway, Japan, and Argentina. One follower's country of origin is a mystery to me because his Twitter identification is in the Cyrillic alphabet, so somewhere in Eastern Europe is as close as I can come. The reach of this event is nothing short of amazing.

Many of the fans and followers are not only interested in the KISS Cadillac story, but have their own additions to the legend. That brings us to the story of what happened to the Cadillac Key to the City that was presented to KISS at the civic breakfast on the Friday of their visit in 1975.

Now, let me preface this tale by noting something about KISS Cadillac memorabilia. The 1976 CHS yearbook is a much sought after piece. Many of these have been sold to KISS collectors by Cadillac residents for hundreds (if not thousands) of dollars. The copy that resided in the CHS library was stolen.

The plaque given to the school by the band was stolen shortly after it was displayed in a CHS hallway (click here for that story).  However, plaques were also given to several people (including me) at the civic breakfast. I know of at least one (maybe two) that were sold on eBay.

My point is that memorabilia is bought and sold all the time. When these pieces wind up in the hands of ardent fans who treasure and value the pieces, for me that's a best case scenario.

In the case of the Cadillac Key, a lifetime KISS fan who has been following KISS Cadillac on Facebook and Twitter was kind enough to contact me and inform me that he has the key. Thad Zylka of Las Vegas told me: “I grew up in Standish, Michigan and have been a KISS Fan for many years. In 2000, I went to a KISS auction at Paramount Studios in California and bought a few items from the group, including the Key to Cadillac. As a fan who grew up in Michigan, I just knew I had to buy the key.”

I would interject here, that when it comes to KISS, you can only imagine how many items have been given to the band over the years. Thousands. So in 2000, after accumulating a warehouse full of things, they decided to give fans a chance to own some of the memorabilia. Says Zylka: “They sold everything. The catalog was massive, like a history book. Gene and Paul wanted the fans to have a piece of the band and a piece of history. I am sure now they regret selling some of it.”

So, rather than being forgotten in a dusty warehouse, the key is now in the hands of a fan. It gets better. “I got the key signed at a concert in Denver a few years back. I have all the originals except for Ace, which I hope to get it some day.” The signatures make the key even more unique and valuable.

There is an interesting story in itself relating to the signatures. Zylka remembers: “I had the key under my coat and when I pulled it out for the band to sign it was like Gene and Paul took a step back. It was evident they were a bit startled that I had the key. Gene asked where I got it and I told him 'I bought it from you at the auction.' There was dead silence and I could tell they knew the significance of the piece and they were surprised it was gone.”

The bottom line of all this is that the key is safe and sound and in good hands. Care is being taken to preserve this element of KISS Cadillac history.

As for the future of the key, as you might guess, Zylka has not thought about selling it, but he does recognize its importance. “I have told my wife that it needs to be in a museum some day for the public to have the ability to see it because of what you did in Cadillac in 1975,” he says.

UPDATE: The good news is that Zylka was able to connect with Ace at a show in Denver and Ace signed the key. Zylka then attended the KISS Cadillac Homecoming 40th Anniversary Celebration and the key was displayed for all to see. It was a wonderful thrill for to have Thad and the Key in Cadillac for the celebration. 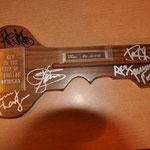 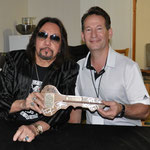 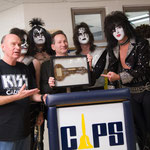